Last weekend we did *such* a fun thing. Some friends whisked us away to the drive in. . It was the best time I’ve ever had at the movies!! There were THREE movies. Great friends, great kids, great dog, knitting, lovely picnicking, and lots of laughs. I think it’s one of my new favorite summer things!! I hope our family gets to spend a lot more time there this summer. If you are local and have never been to Bengies–please go!! 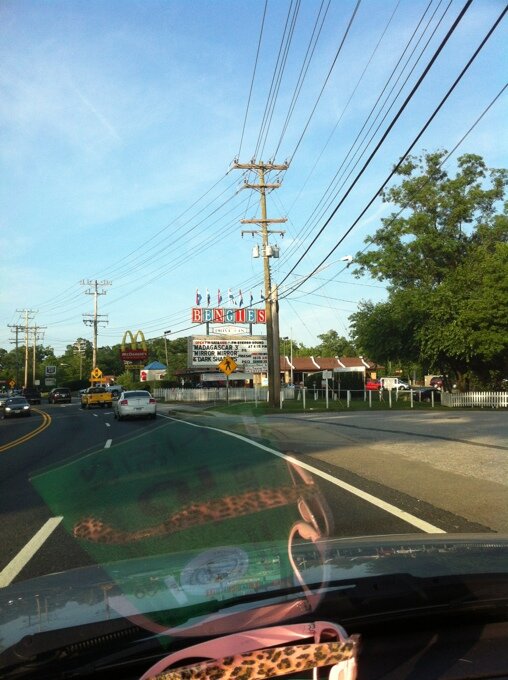 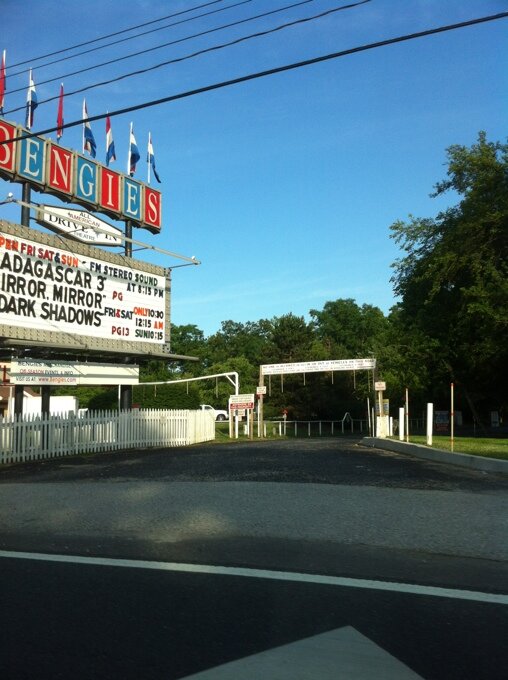 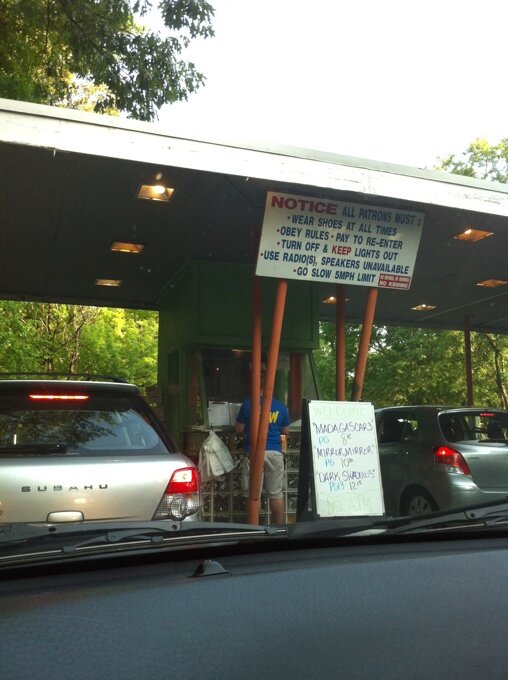 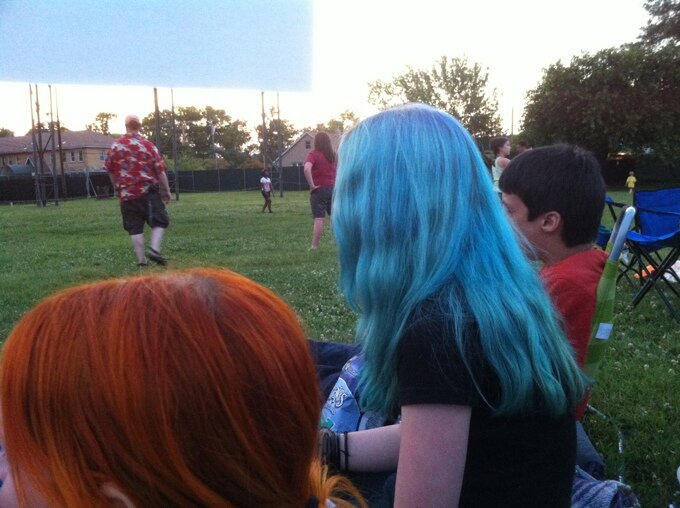 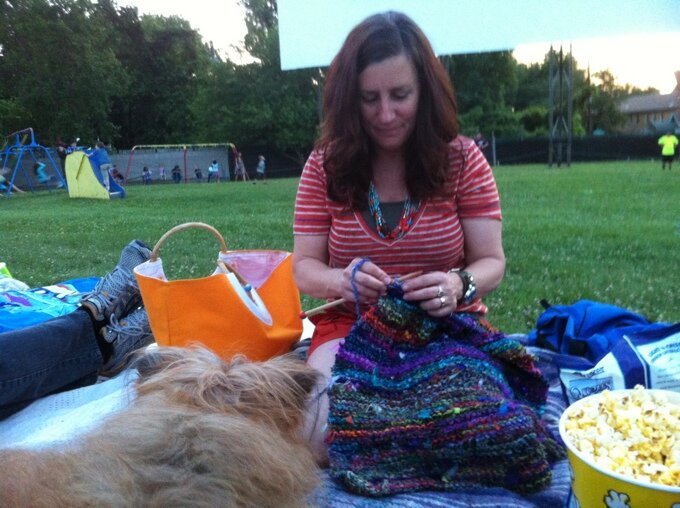 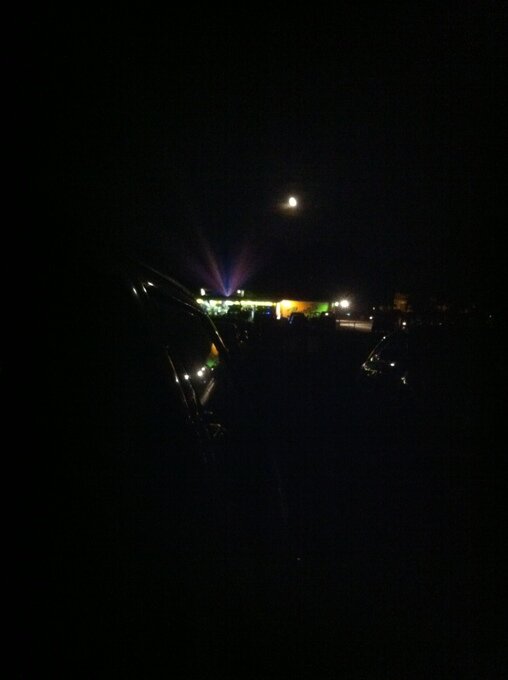 Welcome to The HAPPY Summer!!

Hallloooo. I’m back. It’s been a long, long year. And that’s enough to say about that really. I’m finished as a Montessori gnome for the foreseeable future… awaiting my next adventure. Gnomegarden makings have been down due to said long, long year. It may open like a tinkerers cart for a while… here and there. With various makings. I’ll post updates here.

MOST OF ALL, I have returned to this webbylog to record a summer-long project of rediscovering the practical magic of every day life. I have this gift of being at least *mostly-home* with the gals this summer, and I want it to count BIG. I have many ideas for projects and adventures, and the willingness to be surprised by what each day brings. I DO hope it’s mostly good surprises. In fact, that is what I am striving for…

Making it a habit. Not in a Pollyanna kind of way, but as an experiment in what is possible.

As a friend of mine once remarked– “I mean, ANYBODY can be happy when things are going great, right?!” The challenge is to try and make it when things are just plain ol’ ordinary and then some. Even on the worst of days, there’s so much to be thankful for.

Stay tuned–lots of SUMMER coming up.

Oh, I’m behind on the bloggin.

So many good things have been going on that I have MEANT to blog about….

You can check out the flickr stream for the visuals.  In the meantime, here’s a quick update.

Chloe is doing BETTER!  A bit.  But We’ll take it!  Big meeting on Tuesday night with all of the Doctors to make a plan for the summer.  We’re just trying to go with whatever each day serves up and making the best of it.  She is still really dizzy all of the time, and there are some days that feel bad, but there have been other days with SWIMMING, and SKATING at roller derby!  ( see Jimmy’s blog for details  )  That’s HUGE!!  We’re really happy and hopeful that we’ve seen the lowest point now with the POTS adventures.  She has started outpatient physical therapy, which will help her work on her strength and endurance.

And it’s almost SUMMER… which helps with the moods around here for sure!

Lil is great, and looking forward to school’s end in a couple of weeks.

Today we wrapped up a project that has been in the works for a couple of years.   It’s been a  lot of fun and makes me really happy.

Now I get to smile  about them every time I go out in the garden.:)

Here’s a slideshow if you’d like to gander at the individual flags.

Garden of Weedin, Part 2. The BAD and the UGLY

We will NOT negotiate* with garden terrorists…

* But we will feed them organic produce and send them on a FREE all-expenses-paid exotic vacation.

He will also answer to “crap-weasel,” or “here is some lovely lettuce and brussel sprouts.”

My sister Sharon and I share a common enemy.  Marmota monax. Latin for Terrorist Varmit.

Cute, right?  Name a holiday after it!!  A movie!! Call it sweet things like “woodchuck” and wonder about how much wood it would chuck….If it only could.

Bake it a bless-ed cupcake.

That gaping maw is where it will put your garden.  Your WHOLE garden.  This blog has some beautiful illustrations of the havoc they can wreak on a garden.  This is just what the NJ sister and I have experienced without the nice pics to show you.

The almighty WIKI reports that most live 2-3 years… except for that little trucker Wee Wiarton Willie– who lived for 22 years.  Ours lives under the front porch in a nice cave dwelling with garden terrace.  He often rolls out of bed to a loverly breakfast al fresca.  For the past years he’s eaten a mile-wide path of destruction through anything we’ve grown in the garden.  Except peppers and basil.   He likes to shake it up too… last year he waited a long while and employed the element of “SURPRISE, I didn’t die over the winter.”

I DO love me some Guinea Pigs and Hedgehog, but Hates. Him.

Not tough enough for bad-nature-karma-death-tactics, we are trying the havahart dining-car.

If LOL happens to be DEAD– rest his angelic soul– the havahart will reside like the sublime-Buddah-shrine in a nail salon.  I will place offerings of fruit and burn sweet incense all season long in honor of our varmit-free renaissance.  Maybe we’ll catch a raccoon or 2.. Or some of Erin’s stealthy cats.  Please note, previously promised vacations are only for LOL.

I somehow doubt that dreamy possibility however…  As Jim says,  “Make your own luck.”

That there is what Sharney and I like to call the FOUR DOLLAR CANTALOUPE.

Here is a bit of information on what to do next…  Don’t worry, I’ll be sticking a stamp on him and sending him some place legal to release him… Or at least it won’t be near your yard.

This is the most awesome exterminator since Sir Burroughs.  Maybe we’ll call him in if old LOL wins again.

I’ve also decided that it’s maybe about time to start researching “We’ll come and fix your house up shows.” I  think it might be our end-of-the-world strategy.

God save the Queen.

Back to my spinning wheel.

Garden of Weedin. Part one– the Good.

What a difference a month or so can make…

The cleaning-up part of the garden year has not historically been one of my strongest talents.  While I’ve been know to pull off some 11th hour jungle-takeover heroics during the season, I am not so much a fan of the fall clean up.  Stupid, as it just means more work, and more weeds, in the spring.

I have the awesome blessing of being much healthier this new year than in many past… and I am marveling at the renewed joy and total stress catharsis of slogging around in the garden.  Last week was so nice on cello lesson day, that I settled Lil and Ryan on the front porch and made like a groundhog in the garden beside them.  For one thing… I think cello accompaniment should always be available when there is gardening to do.  That was a nice idea, for sure.

This was the sad blueberry hedge– which is now TWO bushes that aren’t doing all that well.  The strawberry plot has fed no one but SLUGS for a few years now, so I ripped that apart as well.

Don’t think it’s all freedom and ease, there are a fair few mulberry roots that are giving me fits and conniptions….  I reached a standstill on this one… I cannot get it loose, and am not sure how to KILL IT FOR SURE at this point, so if anyone can advise, please leave a comment!!  I do not want to see it’s nasty devils-snare tendrils ever again.  As you can see it is right near the retaining wall, so no tying it to the gnomemobile and heaving-ho.  The roots appear to go down under the wall and driveway.

So it’s one of the most exciting times of the year for me… garden is cleaned up and ready to go, and I just need to make a new plan.

Please send any ideas you want to share… I need a new full-sun ornamental vine idea to grow on the fence– I have grown hyacinth bean there in the past but am looking for a new inspiration.

I am also WIDE OPEN for garden orphans and contributions… If you have an overabundance as your seeds go in and your gardens grow give me a yell!!  We have lots of sunny and shady spaces in need of plant material, I’ll come and thin out your crowd and give them nice homes!

Tomorrow, part two– the BAD and the UGLY.