Snuggling Under the Snowy Blanket.

Wow! on the Thundersnowstorm last night, eh?!!  So beautiful.

It was nice to get some snow dumped on us that will necessitate burrowing in for at least a day.  I’ve been sort of craving just this sort of event, in the midst of all the current chaos swirling here. A little time off with SnowBuddahMind. 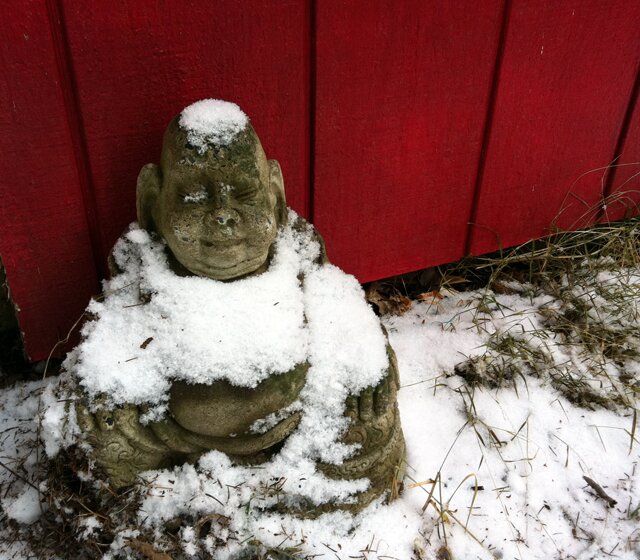 I woke yesterday with an insane craving for S-C-O-N-E-S. Yes m’am, scones.  Baked good of the Gods.  I wanted just a bit of any sort, but had a particular yearning for those amazing Maple Oat Nut Scones that they used to sell at Starbucks many the years ago.  So after a hard road seeking maple extract, I tried not one but TWO recipes.  What else is a lady to do when she stumbles on the “Starbucks Recipe” and also the “Better Than Starbucks Recipe”?  I mean really!  How would you ever know which ones were really better?

So here are the contenders– 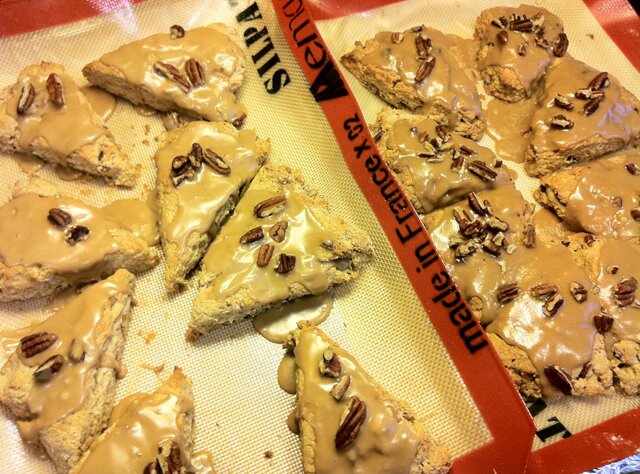 “Starbucks” on the left and “the scones that were  just a little too uppity for their pastry britches” on the right.

Cocoa votes for the snobbery scones.  The plain old ‘”starbucks” clones won with the rest of the family.  The “better-thans” were just a little too sweet and way buttery to count as honest scones for me.  The first recipe’s glaze was less rich also, and didn’t drown out the beautiful crumbly music of the scone.  Juuuust right.  So, give them a try, if you like that sort of thing.  They are monsterous-delish.

Lucky for all of the interwebs, there is a  Scone recipe challenge in full swing over at the Bakelady‘s lovely blog.  Wobble on over and get yer scone on! 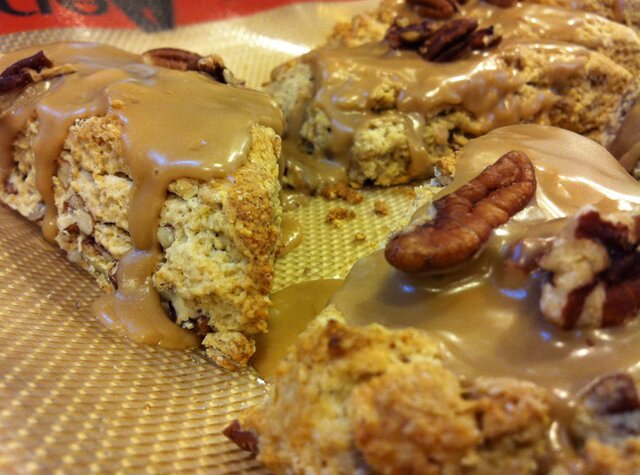 In life, things are a bit calmer.  Chloe thinks she might just be feeling a bit better as a result of some further medication tweaking. Dr A. doubled the vasoconstrictor Tuesday night and  reduced the nightmare-bearing beta.   She swears she’s going to  move around a bit more today and give it a testing-out.  She is looking  a bit more lively up there– making a GIANT origami lotusflower last night.  Like, a couple of  feet across sort of giant.  I ask stupid motherish questions like “Um, what are you going to DO with that when it’s finished?” She responds in kind– “Um, Stuff.”  Harrumph.

Lil stomped delightfully through the cusp of EIGHT years, and is now happy headmistress of a Playmobil Adventurer’s Academy.  Birth-day was also full of MonsterDolls and fae architecture. And a few nice books.   She’s one happy lump of kid.

Today looks like a good fibery-frolicksome sort of day to me.  I’m fixing to knit some and spin a spell as well.  I’ll give you a peek later.

What are you all up to on this fine day?