Shop updated last night! I am getting ready to pack just about all of it off to Maryland Sheep and Wool later this week, so if there’s anything you desire in the shop, please let me know!

I’ve been working on a couple of new things…
Here are the “Raga” yarns. Named for a Sanskrit word that means literally “color, hue, beauty, and melody” and ALSO the term for some really nice Indian music— they are mostly cotton yarns that are complex and so textural. The process of making them is a bit long, but results in a yarn that isn’t too primitive and also very strong and balanced, structurally speaking. I really like it, and hope you do too.  I am dreaming of great summer bags made from it! 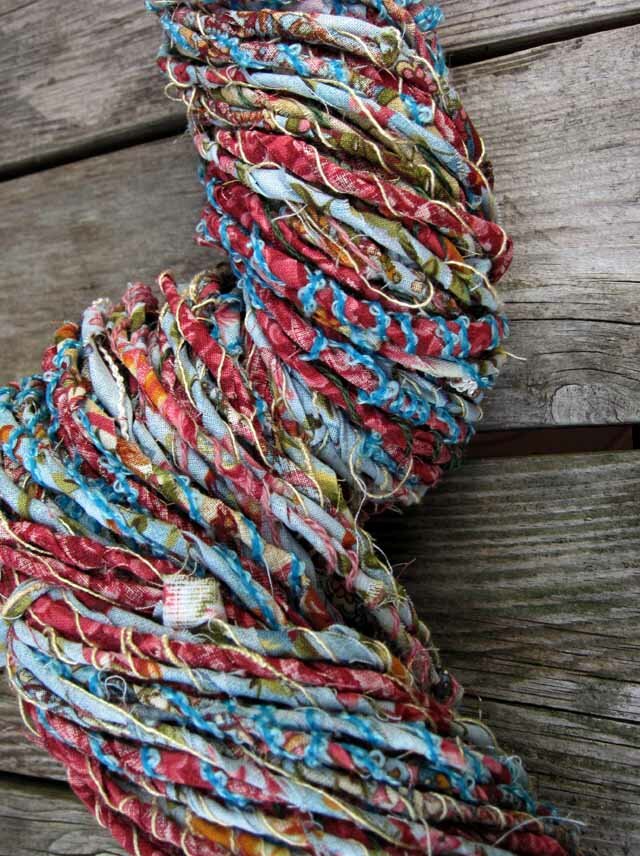 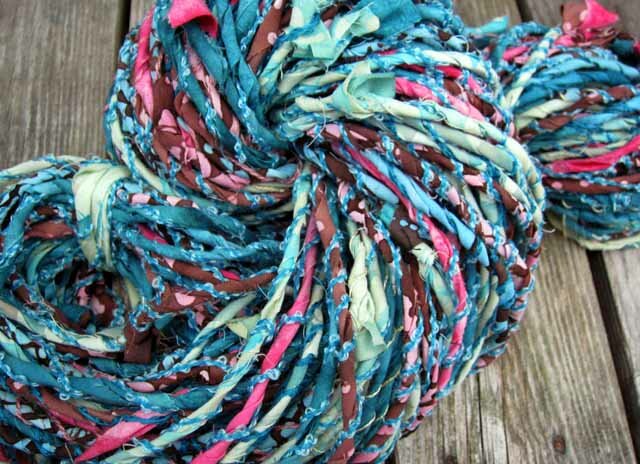 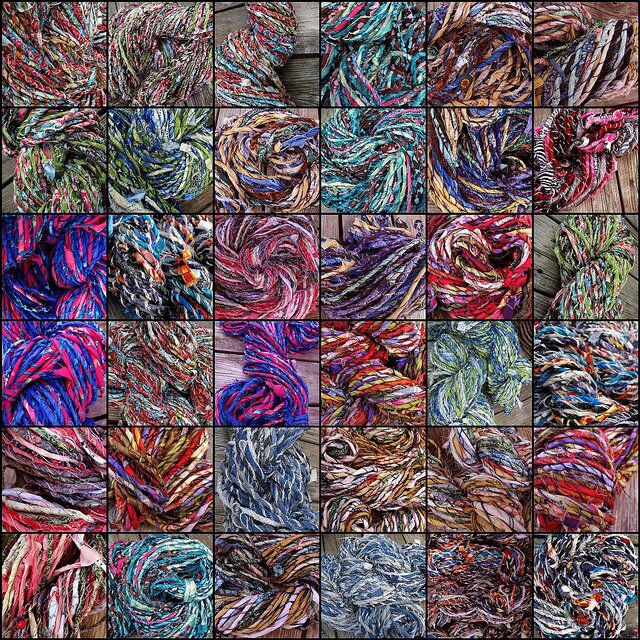 New to the gnomegarden etsy shop, and spun in limited quantities, are the Charms yarns.  Trouble dolls are not new to art-yarns, but these have a bit of a story behind them…ready?

These are inspired by my girls.  Like a lot of kids, both of them have a penchant for talismans, amulets and magical thinking.  With the stress of this past fall and winter, Lil took to some pretty complicated before -bed rituals.  She was having such a had time sleeping, so I dug out a box of old worry dolls from my own treasures.

She started using them ardently.  Each night before bed there was the telling-of-the-worries, but also, the dolls were very real for her, so they had to be free at night.  You know, to do their work I guess.  That started out with a very organized placement around her pillow– 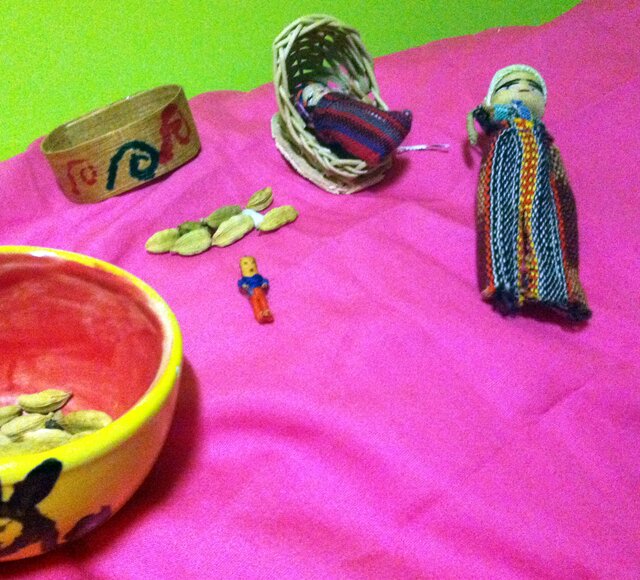 add a bunch more dolls.  Um, the cup– that’s full of cardamom.  Yes.  We played “dreidel” at the Holidays and for lack of pennies, I grabbed the giant jar of pods in the pantry.  I might have also mentioned something about the scent of them being comforting to me… and maybe as I was trying to get her to STOP dreideling and go to bed, that she should take the pods with her because I thought they might just help her bad dreams…  Ker-plunk.  Its like that falling-blocks  computer game, but with parenting steps and miss-steps.  Suddenly Cardamom pods had to be a part of the nightly ritual.  Oh, and that cup also has all of her baby teeth mixed in with the pods.  It does.  I dunno about that one…( cue voodoo drumming. )

Inevitably, the mornings brought a gorgeous sleepy-eyed girl with worry dolls and cardamom pods all tangled up in her hair.

SO around the Holidays I made my friend Sue at Lovely Yarns a gift of a yarn inspired by this story. It spun like this– and it smells so nice. 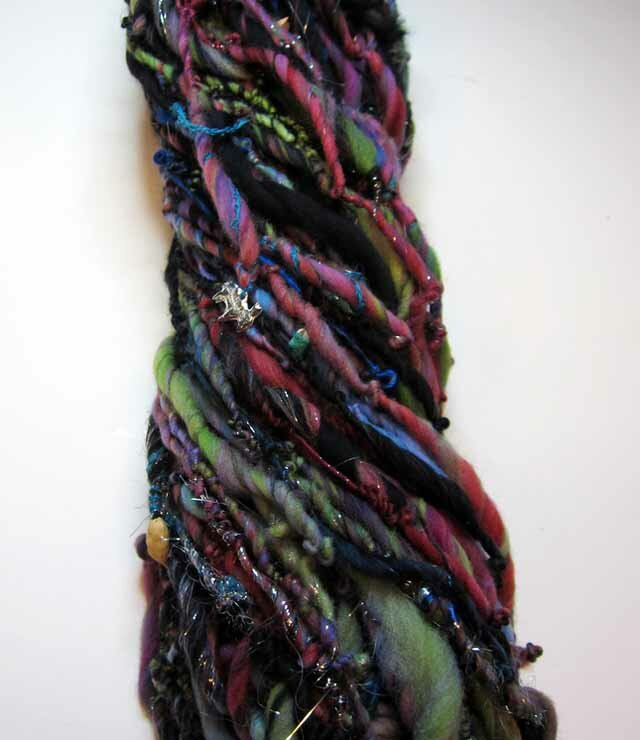 I spun in a few Latin American “miracle charms” or Milagros for good measure. While not of Latin descent myself, I have been fascinated by these since my friend Cat told me tales of them from a trip to Brazil.:)

Milagro refers to an ancient aspect of Hispanic folk culture: small silver or gold votive offerings in the shape of arms, legs, eyes and other body parts; animals, fruits, vegetables, etc. These milagros are often attached to statues of saints or to the walls of churches/shrines.  In the classical sense, milagros are offered to a favorite saint as a reminder of the petitioner’s particular need, or they are offered to the saint in thanks for a prayer answered.  If, for example, someone has a sore arm, a tiny silver arm is hung on or near the favorite saint; the farmer who hopes that his pig will bear him many healthy piglets, asks his patron saint for intercession, and pins a pig milagro on the saint’s robe. Milagros can be flat, three dimensional, tiny or large; they can be of gold, silver, wood, lead, tin, bone, wax or whatever the petitioner desires.

So I’ve been working them into some yarns as a sort of magical-intentioned-adornment.  I like the idea of a garment or object made from the yarn that feels sort of cosmically hopeful or even protective.  That’s how I like to think of them anyway.

here’s a few shots.  I have a bunch of really bright offerings right now and will keep them coming in various colorways until the blessings are all spun up. 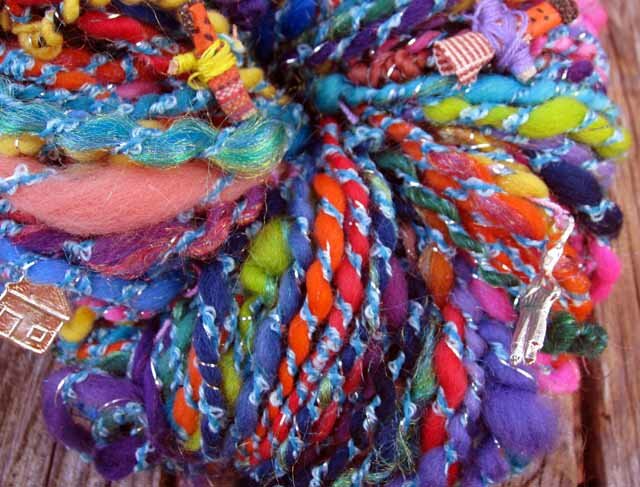 ( If you click on the photo mosaic, you can see a larger one.)

That’s all for today.  Have a great one!